There are four parts.

2. Do(Cuirass; breastplate; Gahb) --- protects the torso, chest, belly, and waist. Usually made from bamboo, it is also available in fiberglass or molded, high impact plastic. 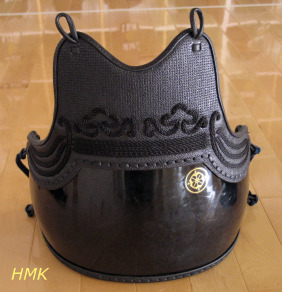 3. Tare(Waist armor; Gladiator skirt; Gahb-sahng) --- a type of apron that protects the thighs, hips, and groin from inadvertent hitting. It is not a target and you should always avoid hitting anyone on the tare. It is made entirely from heavily quilted cotton. Sometimes it is trimmed with leather.

The tare is extremely flexible and allows a great range of motion in the hips and legs.

The center flap is usually covered by a cloth bag (name tag ; zekken) that usually displays the dojo name, perhaps the school logo or mark(insignia) in the center, and the fencer's family name on the bottom. 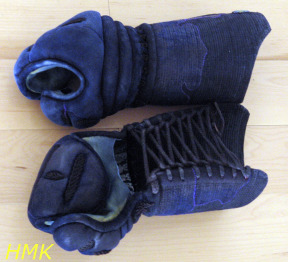 How to wear the kendo bogu(armor)

1. Tare(Waist armor; Gahb-sahng); Place the tare against your abdomen and cross the cords behind your back. Bring the cords to the front and tie them in a bow under the center flap. Tuck the strings up under the waist band. Pull the tare down onto your hips.

a. In kneeling position, put the tare on your lap and wrap the cords around behind you

b. then tie them in a bow under the center flap. 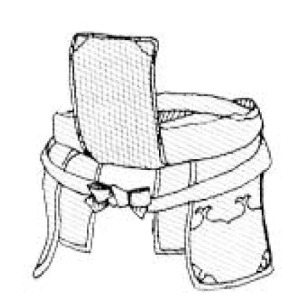 c. The cords should cross just under the back plate.

2. Do(Cuirass; Gahb) ; Next, rest the do on your thighs, and cross the long cords behind you and tie them through the opposite leather loops. Tie the bottom himo behind your back in a bow. The do should fit slightly loose, allowing freedom of movement.

a. place the do against your chest and bring the left string (himo) across and around your back to the top right. Fasten the himo to the leather loop using a special slip knot. Repeat on the other side.

b. Tie the short cords behind you in a bow. 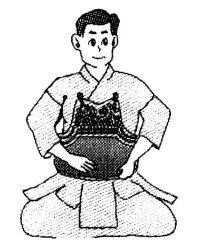 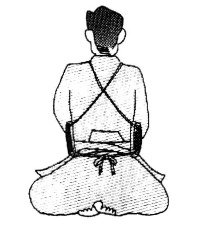 There are some ways to make a special slip knot. Refer the below pictures. 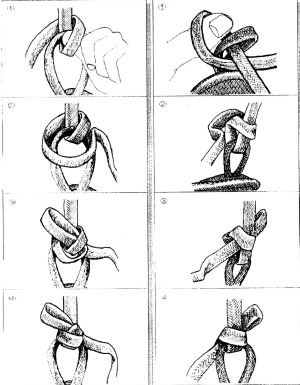 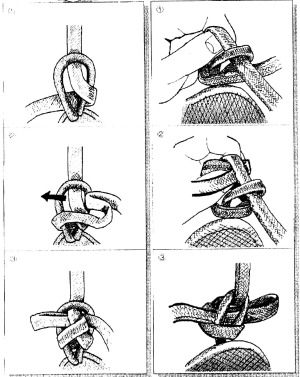 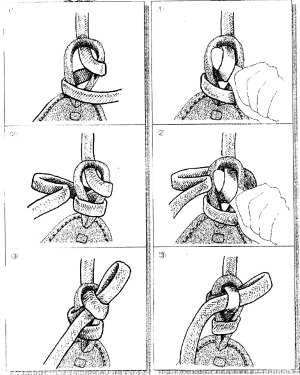 3. Tenugui (Head Towel ; Myun-soo-gun) ; The helm (men) is next, but first you must place a head towel (tenugui) on your head. There are three methods for tying the tenugui.

Look at the pictures below.

A. This is the easiest method. Fold it so it fits your head exactly.

a. Lay the tenugui in front of you and fold it completely in half lengthways.

b. Fold it in about a third from each end. 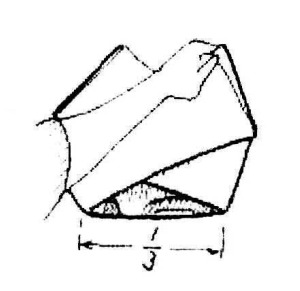 d. Insert the corners into the doubled over central section. 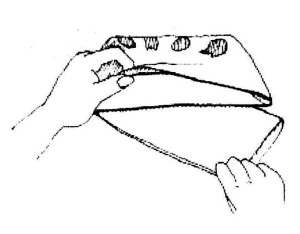 e. Put it on, with the thick sidefacing the front.

f. It should hide your ears, and the thick part should be on your forehead. 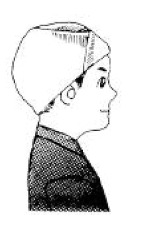 B. Second method: Fitting it exactly. Be careful not to make it too thick over your ears as it will become painful.

a. Hold the ends of the tenugui. 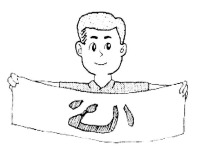 b. Bring the tenugui to your forehead and slide it up until the edge lies on your forehead, with your hair gathered within.

c. Bring the right corner of the tenugui to above and behind your left ear, holding it taught. Keep it in place with the other side of the tenugui. 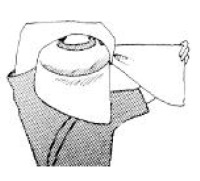 d. Bring the left corner round to above and behind your right ear, and tuck it in. 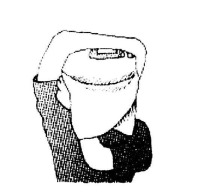 e. Lift up the flap formed in front of your face.

f. Your ears will be exposed. 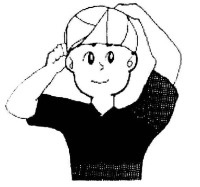 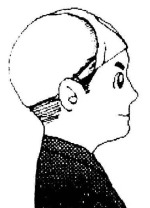 C. Third Method: Wrapping it around your head.

a. Hold both ends of the tenugui,bite the middle of the edge and draw it back over your head.

b. Wrap it round your head, left to right and then right to left. 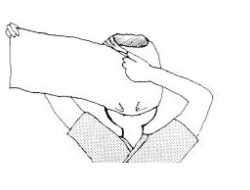 c. Swap hands and tie the two ends in front of your forehead. 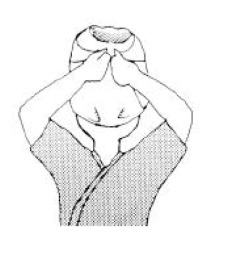 d. Lift up the front and tuck it in. 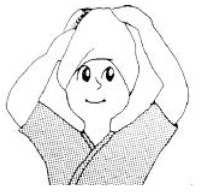 e. Pull it down on both sides.

f. Your ears will be hidden. 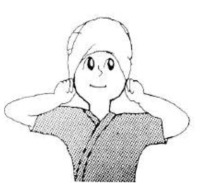 There are 2 methods to put the helm (Men) on. Refer the pictures below.

Putting on the men - A

a. Take the cords from the fourth or fifth bar of the men grill, cross them behind the men then pass them through the top bar and back behind again. 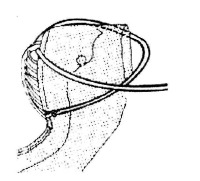 b. Gather the cords in your hands, open the men, put your chin in and pull it over your head. 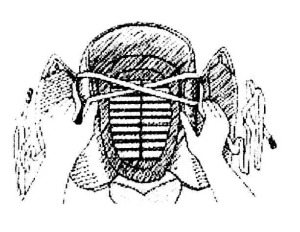 c. Firmly tie the cords in a bow so that the men will not twist and adjust the lengths of cords so they are even.

Putting on the men - B

a. Put your chin in and put the men on, then cross the cords, once behind your head and then in front of your jaw. 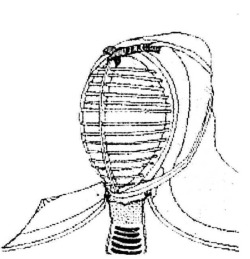 b. Cross the cords behind your head once more and then pass them through the topmost bar of the men grill.

c. Firmly tie the cords in a bow so that the men will not twist and adjust the lengths of cords so they are even. 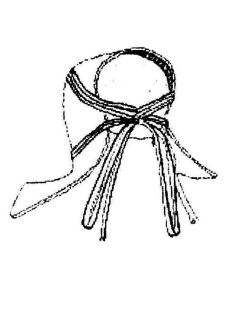 You should wear the men properly so that you can see from the view slit (monomi), the slightly wider gap between the 6th and 7th bars.
Your jaw and forehead should fit exactly inside of the men.
The back of your head should not poke out.
The men cords should not longer than 40cm from the knot.
After the tying, lift both sides of the flaps to let air through your ears.
Also, after tying the cords, you should check out the cords are not separated and tied neatly. 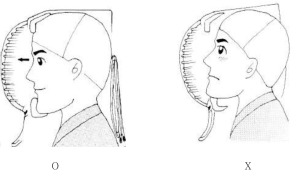 Slip the left gauntlet (kote) on first, then the right. Make sure the lacings of the kote are not hanging down, interfering with your grip.

Put on the kote by pushing the glove. If you pull the forearm section you will deform the kote and hurt the joint.

How to take off your armor

How to Take Off: 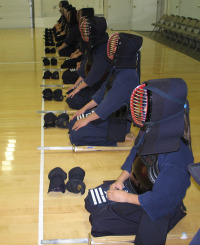 Untie the string(himo) from the men and place the men on top of the kote, face down. Make sure the strings are placed neatly inside the men.

Then untie the tare and place it in front of the do.

Make sure to tie the strings of the tare and do neatly.

Take the tenugui off and neatly fold it and place it on the men or put it inside the men.

This depends on school(dojo)’s custom.

How to clean and take care of your armor

After practice, wipe off the sweat from the men with a piece of cloth. Then place in a well-ventilated area. If you have a new men, fold the wings forward so that it will be more comfortable to wear in the future.


It is important to keep your armor clean and odor-free.
It is disrespectful to those around you if your armor is not clean and taken care of. Always keep your men in a well-ventilated area, as well as the kote. It is recommended to use an odor-removing spray for the men and kote. This spray will also help against the formation of bacteria and fungus and should be sprayed several times after practice and placed in a well-ventilated area.

If you put your bogu in a bag while it is still wet from sweat, it will not be properly ventilated, so it is recommended to wait until it is dry and then placed in a bag for storage.

There are also types of men where the chin rest comes off and can be cleaned easily.

Adjusting the lengths of the men and kote cords

1.Adjusting the men cords;
Put your men on and tie the cords. Adjust the cords so that they are hang 40cm below the knot, and then cut off any excess.

a. Unthread the ends for 3 or 4 cm. Take two or three of the threads and twist them into two 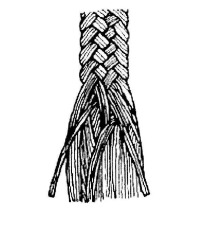 b. Wrap the two strands once round the whole cord. 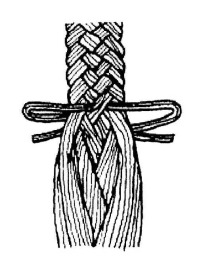 c. Tie them tightly and arrange them neatly.

2. Adjusting the kote strings;
Make sure that the string of the kote is not too long. If it is too long, then tie them again, or if it is still too long, then it would be wise to cut them.

If you want to know general information about kendo armor, sword, and uniforms, please see the kendo equipment.